Electric bikes are the innovation in riding with ease and fun. These bikes are the combination of your conventional motorbike and your classical manual bike, but it is more eco-friendly way of travelling. They’re more robust than your manual bike, plus with an integrated motor and usually, a lithium battery, you can go anywhere. You must need to know All About Electric Bike Batteries.

Batteries are the main power source of these electric bikes, and without them, they’re your plain old bikes. Like your average batteries, you need to charge them and protect them from any direct contact with a magnetic or heat source that may damage the integrated battery. These batteries are extremely light for the power they consume and charge relatively fast as well.

The electric bike industry has grown into new heights, and looking at the sales of these products is only going to get better from here. With all this technological development focused on these bikes, their motor and batteries are given the most attention. The high-quality standard Lithium-Ion batteries are installed into your electric bikes, and that are too good for a reason.

All About Electric Bike Batteries 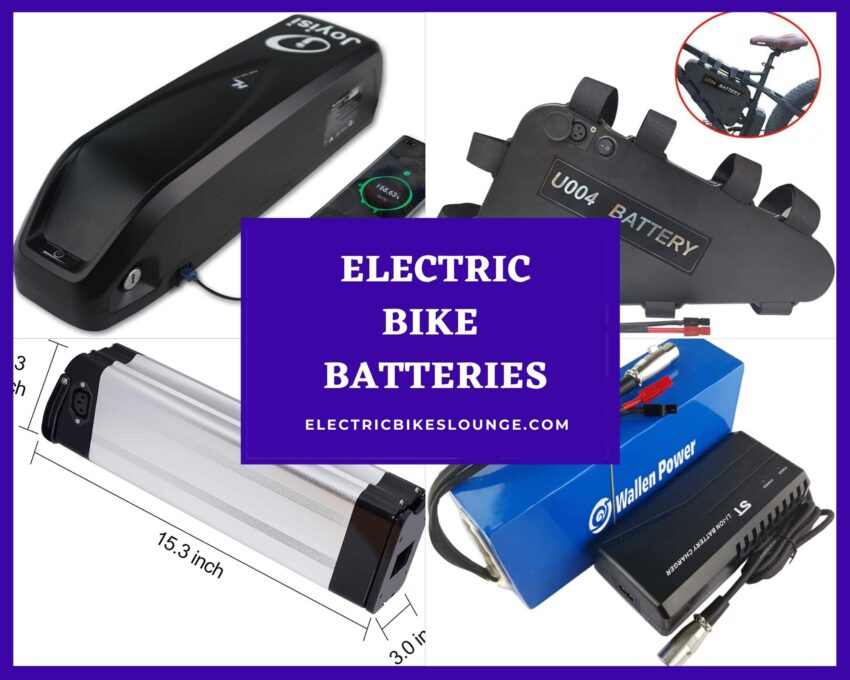 These batteries have many special qualities to them. They are much lighter than your average acid batteries. Lighter batteries mean that it is easier to control your electric bike, and let’s face it, who wants to pedal a heavy bike? Also see the best electric commuter bikes.

Lithium polymer batteries are also used to give variety in battery shape designs. As electric bikes are dominant in the aesthetic aspect, having appealing battery designs is also the logical way to go. This type of design allows manufacturers to model their battery cases according to the look of the bike, instead of installing a chunky block of batteries to the bikes.

Amp-hours or watts hour is used to measure the capacity of the lithium batteries. You can use any of the measurements, but usually, watt-hours are used more frequently. The bikes have various capacities, ranging from 200W to even a whopping 500W. Super E-bikes have battery charges of around 900W. Having a dual battery system doubles the output of the battery capacitance.

As the batteries are a relatively older piece of technology, the price has dropped significantly. Back in the early 2000s, the price of the batteries was fairly high, going into thousands of dollars. Now its extremely cheap, with the rate of how the technological world is progressing. It’s assumed that the price will even drop lower in the coming years.

With the push of environmental factors, and the tech giants, that are Tesla motors. The whole world is following in its footsteps to make more eco-friendly power sources. This spells technological advancements, and that means a further price drop in the coming times. The best batteries that are cheap, long lasting are very effective and useful.

As mentioned before, these batteries are extremely eco-friendly, and part of the reason is that they are easily disposable, and most importantly, they can be recycled. In the U.S.A and many European countries, it is illegal to dispose of acid batteries because of the negative environmental effects it has, so getting rid of it becomes difficult.

This problem doesn’t arise with lithium-ion batteries. They have a far less negative affect, and they don’t have many regulations regarding their dumping. Hence you can even put them into the recycling bins.

With so many advantages to owning an electric bike, it’s clear that one of them is because of their great batteries. All these advantages contribute to the exciting new properties that these batteries give, which in the long run, are beneficial for all the riders and adventurers out there. All About Electric Bike Batteries guide helps you to choose the best electric bike battery.

Electric Bikes Lounge believes in unbiased and honest reviews to help readers and consumers make the right purchase. Our team of experts work very hard to research products and write down each any every feature in depth. We believe customers need to know everything before buying any product.

Electricbikeslounge.com is a participant in the amazon services llc associates program, an affiliate advertising program designed to provide a means for sites to earn advertising fees by advertising and linking to amazon.com. Amazon, the amazon logo, amazonsupply, and the amazonsupply logo are trademarks of amazon.com, inc. Or its affiliates. As an amazon associate we earn affiliate commissions from qualifying purchases.